After 31 years with CNIB, Debbie Gillespie prepares for retirement and reflects on her time with the organization and the advocacy campaigns she's worked on. 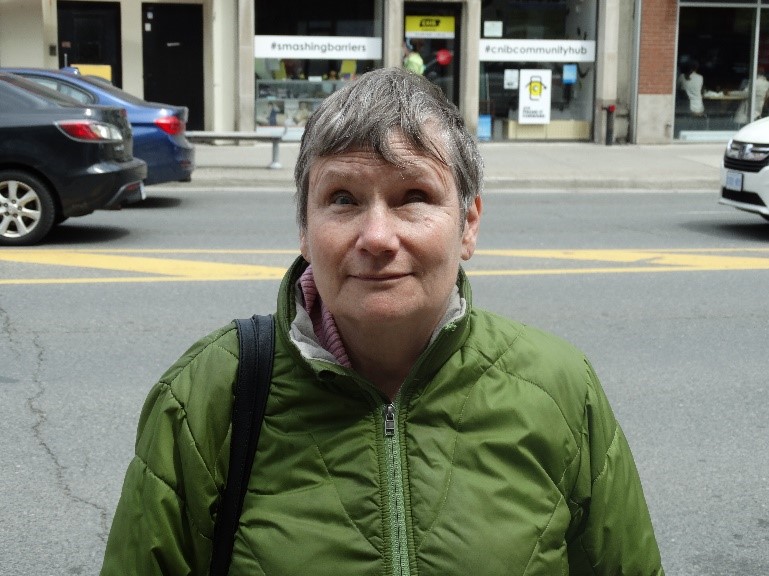 What was your first year like at the organization?
I joined CNIB in June 1988 as a braille proofreader. I had to take the braille transcribers course, so the first year was full of learning.

How many different roles have you had?
I started my career as a braille proofreader before I became the coordinator of the proofreading unit. Following that, I spent about 20 years as the manager of braille publishing and quality management. Then, I became an accessibility consultant and taught courses on web accessibility. From there, I hosted braille workshops across the country. In 2013, I joined the strategic relations and engagement team. Three years later, I worked at the Toronto Community Hub as the built environment and transit advocacy lead for the CNIB Foundation.

What was your last year like at CNIB?
I was always on the move and busy working on new initiatives, which was exciting. I spent a lot of time building relationships with stakeholders in the digital space, wayfinding space, and in the advocacy side of things.

Looking back on your career, what are some of the things you're most proud of?
That's a hard one! I would say that being part of the team that helped develop braille bank statements for RBC back in 1991 is up there. They were the first bank in Canada to offer braille bank statements. From there, other companies started producing braille statements.

Why does advocacy matter?
Advocacy means more independence. It's the fundamental piece as to why you're advocating. As a blind or partially sighted person, your daily life is affected by what you can and can't do, such as the point of sale kiosk that you can't use or information that you can't access. Advocacy is making sure the infrastructure is in place so you don't have to ask for assistance – it's the vehicle to independence.

How have the advocacy issues you've worked on changed over the years and how as your approach to advocacy changed?
All the issues that people have advocated for are still relevant, but it gets more complicated with time because there are new issues and new layers added to the mix. New things pop up as societies and technology evolve. Things like accessible pedestrian signals – they had to be invented before you could advocate for them!

What will you miss the most about CNIB?
I'll miss being involved in groundbreaking initiatives that CNIB consults on. I'll miss being a part of that. I still want to make a difference in people's lives.

What's one piece of advice you would share with young advocates with sight loss?
Don't be afraid to ask questions and say what you need. Advocacy is a long process – it's not instant. With each advocacy campaign or initiative, you will learn something in the process to use for the next time you wish to advocate.

Read more articles from the June 2019 issue of Equalize:

Equalize is published quarterly. Missed an issue? Catch up here!

Mohawk College – Accessible Media Production program suspension
June 16, 2022
Mohawk College suspended its Accessible Media Production (AMP) program for Fall 2022 due to not meeting targeted enrollment numbers. Dr. Mahadeo Sukhai, Vice-President, Research and International Affairs and Chief Accessibility Officer at CNIB has penned a letter to the President of Mohawk College, Ron J. McKerlie, in response to the announcement.
Deloitte Canada Donates Smartphones to CNIB’s Phone It Forward Program
June 08, 2022
CNIB is pleased to announce that Deloitte Canada has generously donated 300 smartphones to our Phone It Forward program. This incredible donation will support and empower people with sight loss across Canada to live more active, independent lives.
The Government of British Columbia announces new funding for Deafblind services across the province
June 01, 2022
CNIB Deafblind Community Services is thrilled to share that in honour of National Deafblind Awareness Month, the Government of British Columbia has announced that they will be providing dedicated funding for intervenor services to support British Columbians who are Deafblind.
Canadian Congress on Disability Inclusion (CCDI)
June 01, 2022
On May 26 and 27, 2022, CNIB participated in the Government of Canada’s first annual Canadian Congress on Disability Inclusion (CCDI) in advance of nationwide celebrations for National Accessibility Awareness Week. The virtual, two-day event was opened by the Minister of Employment, Workforce Development and Disability Inclusion, Carla Qualtrough, who spoke about the realities and experiences of persons with disabilities today, and the work ahead to realize disability inclusion in Canada. Angela Bonfanti, Acting President and CEO of CNIB, participated in a virtual panel discussion on Inclusive Services in Rural and Remote Communities.
CNIB offers support for those impacted by Saturday’s destructive storm
May 25, 2022
With Saturday’s destructive storm still impacting our communities, we are thinking of you, and your family and friends. If you need support, please call us at 1-800-563-2642 or email us at GlobalAffairs@cnib.ca, so we can share local resources. Our Contact Centre is open Monday through Friday from 8:00 a.m. until 7:30 p.m. EDT. If you’re currently experiencing an emergency, please call 911.
END_OF_DOCUMENT_TOKEN_TO_BE_REPLACED