Welcome to the September edition of Equalize! In this issue, we reflect on CNIB's Re-Vision ADP campaign thus far, dive into the accessibility of the Ontario general election and hear from a provincial candidate with sight loss. We also explore accessibility in relation to pedestrian crossings and ask you to weigh in on Greyhound Canada's plans to downsize its Canadian business. And, CNIB makes history at the Pride parade in Toronto. 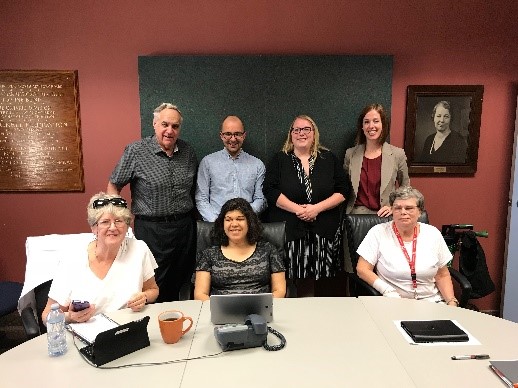 The CNIB Foundation Ontario launched the Re-Vision ADP (Assistive Devices Program) to help get up-to-date technology into the hands of Ontarians who are blind, partially sighted or Deafblind ahead of the Ontario general election on June 7. With your support, nearly 900 letters were sent to Party Leaders and MPP candidates through the Re-Vision ADP microsite, and we received responses from all parties.

Ahead of the election, CNIB hosted media launches across the province to provide candidates and consumers with an opportunity to speak to the issue. As a result, CNIB reached 3,790,760 individuals through 46 media opportunities. Tweets resulted in 16,676 impressions and Facebook posts generated 14,088 impressions.

As part of the campaign, CNIB issued an open letter in support of re-visioning ADP that received support from many stakeholders, including Balance for Blind Adults, the Canadian Council of the Blind and Deafblind Ontario.

CNIB will submit the final Re-Vision ADP report to the provincial government this fall.

As part of our work to improve the accessibility of future elections, CNIB teamed up with Elections Ontario to conduct a survey about the accessibility of the provincial election. Thank you to everyone who shared their experiences with us and provided feedback through the survey. 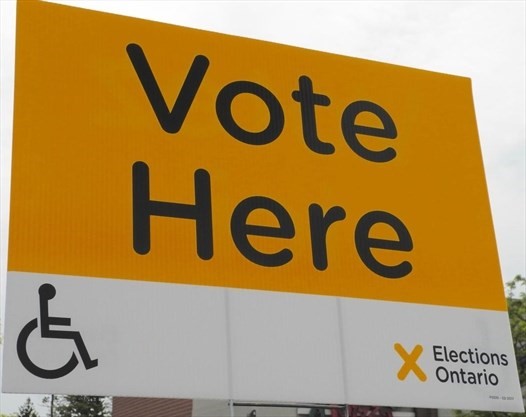 We're in the process of writing the report for Elections Ontario, but the survey indicates:

Under Article 29 of the United Nations Convention on the Rights of Persons with Disabilities, of which Canada is a signatory, persons with disabilities have the right to vote independently and by secret ballot.

CNIB is looking forward to working with Elections Ontario to ensure every Ontarian can vote accessibly, independently, and in secret. We will be sharing the full report in the next edition of Equalize.

The path to politics: Mark DeMontis 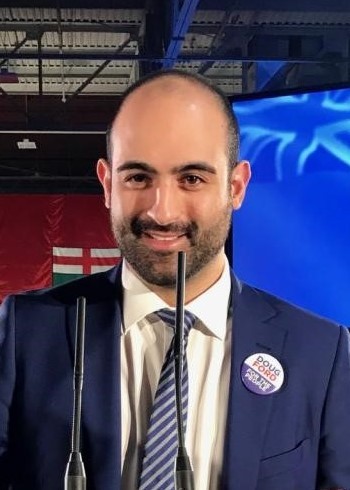 After a successful career as a broadcaster and social entrepreneur, Mark DeMontis decided it was time to tackle a new challenge: running for office, provincially. DeMontis, 31, entered the race as the Progressive Conservative candidate in his own backyard, Toronto's York South-Weston riding. DeMontis managed to capture 32.95 per cent of the vote (12,288 votes), but he ultimately lost the race by 1,168 votes to Faisal Hassan, YorkSouth-Weston, Ontario NDP.

Diagnosed with Leber’s Hereditary Optic Neuropathy (LHON) at 17, DeMontis said running for government with sight loss may have its challenges but, "the biggest reward is the hope you bring. Guiding others is empowering."

What inspired you to run as a candidate in your riding?
Community members had seen my leadership potential and encouraged me to get involved in politics for many years, which was very humbling. There was a need for a strong local candidate for the Progressive Conservative Party in my riding and I decided that life was too short. I love my local community and I didn't want to wait any longer.

What were the advantages of running as a candidate with sight loss?
One of the benefits of having partial sight is that you are less likely to make snap judgements about someone when you meet them because you can't see what they look like. Instead, you rely much more on listening. As a result, it can work to your advantage – all people want is to have their issues heard. I also gained a lot as it provided me with opportunities to connect with others living with disabilities and develop an understanding of the challenges they face.

In many ways, my sight loss didn't matter because I've lived in that neighbourhood all my life. My campaign staff were walking around using GPS on their phones, but I had ridden my bike around those streets as a kid, so it was easy to navigate. Although, I did have lots of funny moments while door knocking. One time, I mistook a long window at the front of the house for the front door and knocked on it, which was startling for the people inside the house. Luckily, I told them I was visually impaired, so we had a good laugh.

How accessible did you find the campaign trail was?
First and foremost, it was important to me that I made my own campaign office accessible and as AODA-compliant as possible, not just for people with disabilities but, for the elderly population in my riding as well. Regardless of the political party you represent, the government is still paper heavy, and a lot of information is in small print. The technology I had to access for the campaign was not accessible, but I see both sides of it. It is still rare for someone with partial sight to run as a candidate, so the system is not set up for it. I met people who had been working in politics for years, but they had never met someone who was blind or partially sighted. I hope my candidacy raises awareness of accessibility on the campaign trail, so it improves for candidates in the next election.

What did you learn from the experience?
Through the party nomination process, I learned what it was going to be like at the doors. People rarely win the first election they run in, so I knew it was going to be a steep learning curve. Running a campaign is almost like running your own business – you have to manage your resources, budget and staff. The experience reminded me of university; I was in a new environment with new people, who didn't know my situation, so I needed to constantly advocate and educate.

What advice do you have for someone with sight loss who would like to become a candidate?
If you have to do it differently, it might take you longer. Given that the system is inaccessible at times, you may need to ask for assistance. It's important to understand that your first election will be learning curve, so take from it what you can. You must go in accepting defeat before you've begun and that's tough, so make sure you walk away gaining more than you lose.

For people who are blind or partially sighted, crossing an intersection can be challenging and sometimes dangerous. Thankfully, new traffic signalling devices are popping up at a growing number of intersections. Unfortunately, these new devices are causing concerns for pedestrians with sight loss. When is it safe to begin crossing? How will marked crosswalks be delineated? Will drivers know how to respond to new signalling mechanisms? 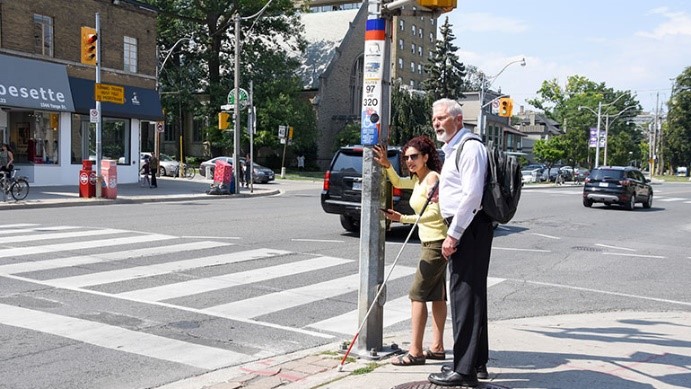 In recent months, CNIB has heard concerns regarding these new traffic signalling devices. We want your feedback, so we can update CNIB's Clearing Our Path: creating accessible environments for people with vision loss manual accordingly. This resource, created in 1998, has become an invaluable tool for anyone interested in making indoor and outdoor spaces universally accessible to people with sight loss.

Tell us what you think! Your feedback will be used to refresh Accessible Pedestrian Signals and Non-Signalized Pedestrian Crossings sections of Clearing Our Path. Please answer the questions below and send them to Lui Greco, Manager, National Advocacy, CNIB at lui.greco@cnib.ca by September 28, 2018.

Effective October 31, 2018, Greyhound Canada will discontinue service in British Columbia, Alberta, Saskatchewan, and Manitoba. In northern Ontario, service will be discontinued on the Trans-Canada west of Sudbury.

“It is with a heavy heart that we announce these service impacts for the end of October. We understand that these route changes are difficult for our customers. Despite best efforts over several years, ridership has dropped nearly 41% across the country since 2010 within a changing and increasingly challenging transportation environment," says Stuart Kendrick, Senior Vice President, Greyhound Canada.

Greyhound reported that it is continuing its discussions with provincial and federal governments about the importance of government investments in rural connectivity.

"The impact on rural clients could be far reaching. CNIB has started advocacy efforts on a province-by-province basis to call upon provincial governments via their transportation ministers to ensure replacement service is provided," John Mulka, Regional Vice President, Western Canada, CNIB.

We want to hear from you! Email us at advocacy@cnib.ca and tell us:

Your stories will illustrate the real-life impact of these changes, which will support our advocacy efforts.

This summer has been historic for CNIB. For the first time in the organization's 100-year history, CNIB supporters marched in Toronto’s annual Pride parade that not only celebrates the LGBTTIQQ2SA community but celebrates diversity and the variety of life in Toronto while respecting differences amongst its citizens and visitors and creating an inclusive experience for all. As we celebrate a century of change with a bold new ambition to change what it is to be blind today, we strive for inclusivity. 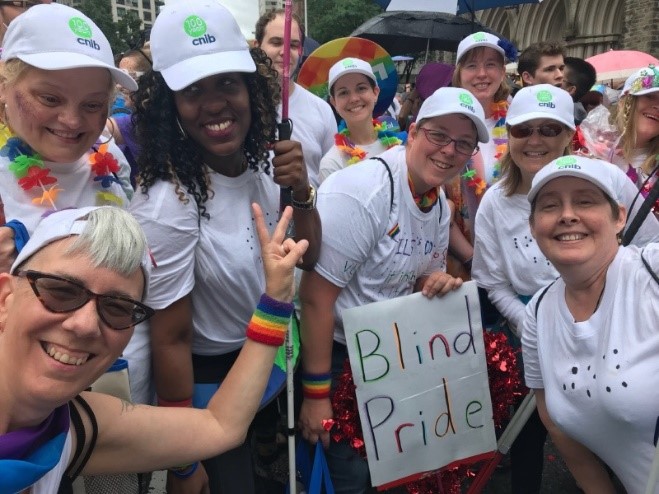 We recognized the magnitude (e.g. crowds, noise, etc.) of this event could pose accessibility barriers for community members who are blind or partially sighted, so we worked with the organizers to ensure our participation was fully accessible. As our group arrived, the excitement was palpable. It was made possible through the help of energetic volunteers who provided sighted guide.

It was beautiful and empowering to see CNIB participants, staff and supporters marching shoulder-to-shoulder in Canada's largest parade. As we walked down Yonge Street, we handed out 10,000 rainbow bracelets that said 'Love is Blind' in both print and raised braille, which proved to be very popular with the crowds. We were proud to come together as a community, raise awareness and show the world that love is blind.

2. Media Training for Advocates & Ambassadors
Learn about the current media landscape, how to bridge and reinforce key messages as well as do's and don'ts for media interviews.

To register, please email advocacy@cnib.ca to indicate the session you're interested and your home city.