There's something about the "Smashing Barriers" sign at the CNIB GTA Community Hub that caught Michael Warren's attention. He had been thinking about volunteering with the non-profit organization and often checked out the volunteer opportunities on the CNIB Foundation's website but fell short of completing an application. Weeks later, he noticed a poster in the window of the hub advertising a volunteering event.

"I thought this was a little propitious," says Michael.

An architect searching for structure in his life, Michael started volunteering with the CNIB Foundation in August 2017.

"I felt like there was something I could learn from people who are blind or partially sighted about living with my own disability." 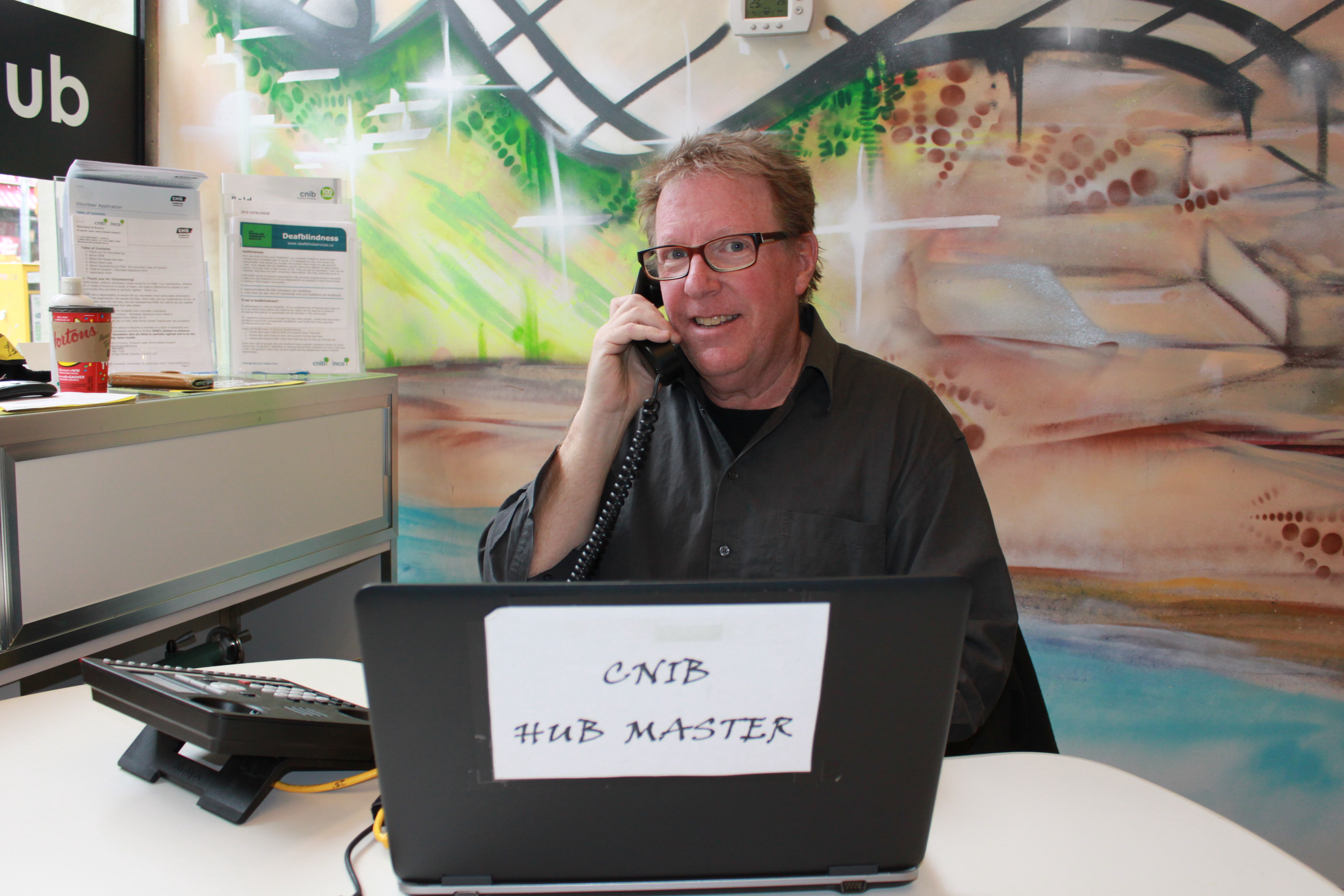 Adopting the title of 'Hub Master', Michael provides administrative support at the hub. Always with a smile on his face, he's often the first point of contact for visitors. He says he felt like he was part of something from the beginning.

"I came in, and I had this wonderful title. 'Hub Master' – it's like a magician, somebody's who's in charge," says Michael.

His volunteer role has evolved to help with the delivery of enriching programs that he's passionate about. In February, he held an architecture workshop with 3D printed models for participants. At the hub, you'll find a tactile miniature of the hub that Michael created with hundreds of Lego pieces.

"It made me feel like there's something I can offer because I love building things — allowing people to see with their hands," says Michael. "It's an opportunity for people with sight loss to understand the space around them."

Through his volunteer work, Michael has learned how people with sight loss lead active, independent lives – it has changed his opinions and perceptions. When he reflects on his at time at the hub, the sense of community reminds him why he's here.

"I don't know where I would be if I didn't have the hub to walk into," says Michael.

Read more articles from the April 2019 issue of On Target:

The BlindSquare Experience
May 17, 2019
Ashley Shaw shares her experience navigating with BlindSquare in Toronto.
Accessible Voting in the Orléans & Ottawa-Vanier by-elections
February 10, 2020
As residents in Ottawa-Vanier and Orléans prepare to head to the polls on Thursday, February 27 for the by-elections, campaigns are in full swing.
On Target – Issue #5 – January 2020
January 20, 2020
Welcome to On Target, our quarterly e-newsletter committed to keeping you informed about the progress we're making towards achieving the three strategic ambitions outlined in our strategic plan, “Bold Dreams, Bright Futures”.
CNIB Lake Joe is Hiring Seasonal Staff for 2020!
January 13, 2020
Looking for work? CNIB Lake Joe, a fully accessible camp for people with sight loss, is looking for you! If you have a passion to enrich lives, make memories and build independence, apply now to join our team on the shores of beautiful Lake Joseph in Muskoka, and help change what it is to be blind!
Educate to Advocate – Empowering Advocacy Across Ontario
August 21, 2019
To strengthen our voices and support the professional development of our Ontario advocates, ambassadors and CNIB staff, we’ve launched Educate to Advocate – an advocacy program designed to drive achievement and equality through education.

Learn how to advocate from the experts!
END_OF_DOCUMENT_TOKEN_TO_BE_REPLACED