Life is a beautiful, wonderful, crazy thing. Life with blindness should be no different. We're emboldening people who are blind or partially sighted to lead independent, active lives and chase their dreams – and we're smashing the stigma and barriers that stand in their way.

Ten years ago, if you asked Larissa Proctor if she ever thought she would have a guide dog, the answer would have been a resounding no. Over time, as her vision declined, she was open to the possibility of a guide dog partnership.

"I'm a fast walker and I was finding that I had to slow down to avoid obstacles," says Larissa. "Places I wasn't familiar with would cause me a lot of anxiety and I thought that a guide dog would help ease some of that." 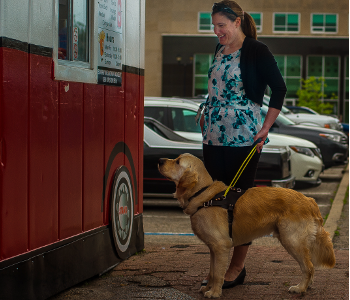 In the spring of 2019, Larissa met with CNIB Guide Dogs and submitted an application. A few weeks later, she got the call that would change her life: she was officially matched with Piper, a 69 lb. Golden Retriever.

"As soon as I found out I was partnered with Piper, I was over the moon with anticipation and overcome with gratitude," says Larissa. "CNIB Guide Dogs really took my work and home life into account and made sure I got a dog that could work in different environments."

Larissa says the training process was an exciting and challenging learning experience that was truly tailored to her lifestyle.

Two months into this partnership, she says the most surprising thing she's learned is how reciprocal the relationship truly is.

"I've heard a lot of people say it's really a partnership, but it doesn't sink in until you're out in the world working together," says Larissa. "He's made more of a difference than I expected. I can't articulate all the gratitude I feel. To his puppy raisers, trainers, everyone who made this possible – thank you."

Read more articles from the July 2019 issue of On Target:

One winner is selected yearly and presented with a plaque and $250 prize. Their accomplishments are also shared across CNIB's national social media channels.
Discrimination against guide dog teams must stop
September 09, 2020
"Imagine walking into a restaurant and being told, "You can't come in," or being stranded at an airport because none of the taxis will take you home, or making a room reservation, only to have it cancelled by the hotel because you're not welcome. This has been my reality for 30 years. You'd think I'd get used to it, but every time it happens, I'm no less shocked than I was the first time it happened." – Diane Bergeron, President of CNIB Guide Dogs
Guide dogs are essential workers, yet they face discrimination daily
August 31, 2020
The CNIB Foundation and Guide Dog Users of Canada are reminding Canadians that guide dogs belong everywhere – it’s the law.
CNIB Foundation transitions its St. Catharines office to a community resource access and virtual model
August 26, 2020
In response to the COVID-19 pandemic, the CNIB Foundation has been working hard to develop innovative methods to deliver our programs and services when we couldn’t physically be together. Virtual programs have allowed us to be more cost efficient, to eliminate transportation and geographic barriers, and to reach more Ontarians with sight loss than ever before – no matter where they reside.
END_OF_DOCUMENT_TOKEN_TO_BE_REPLACED