Guide dogs and their handlers belong everywhere – it's the law

(TORONTO– September 3, 2019) The CNIB Foundation is calling for an end to discrimination against Canadians who depend on guide dogs for mobility, safety and increased independence.

In all of Canada's 10 provinces and three territories, legislation prohibits discriminating against a person with a disability who is working with a guide dog. Discrimination includes denial of access to any premises to which the public would normally have access.

"Despite it being illegal to deny access or refuse service, it happens every day – especially in taxis, restaurants, hotels and stores," says John Rafferty, CNIB's president and CEO. "Today, we're asking businesses to open their doors to Canadians with guide dogs. Not only is it the right thing to do, it's the law."

Legislation varies from province to province, however in all provinces it contravenes the Charter of Human Rights and Freedoms to deny a blind person accompanied by a guide dog access to a federally owned or regulated place or service. 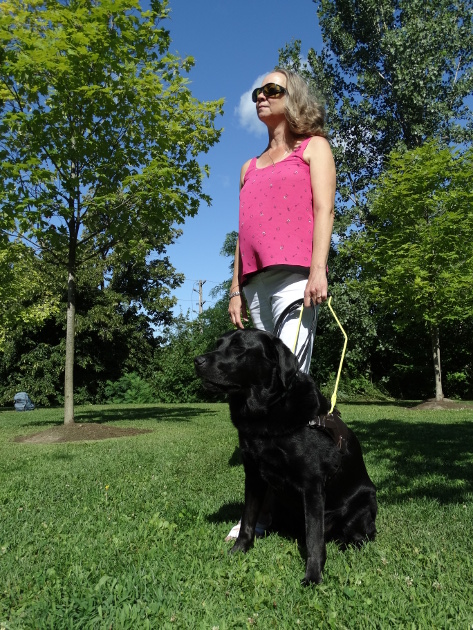 "Since 1970, when the Blind Persons' Rights Act was introduced in Ontario, it has been illegal to discriminate against blind individuals who are accompanied by a guide dog – or deny them access or service," says Cindy Shone of Toronto, who depends on a Labrador/Golden Retriever guide dog named Barney. "Yet, nearly 50 years later, it's still happening."

Shone says she still encounters people in public spaces who question her guide dog's, access. "Recently, a security guard at a fast food restaurant approached me and tried to tell me that no dogs were allowed in this restaurant. I was pretty shocked," says Shone. "I pushed back and said to him 'This is a guide dog. It's wearing a harness and it's a signature breed of guiding animals - I think you need to brush up on your legislation'."

If refused service or denied access, guide dog handlers in Ontario should call the police. Under Ontario’s Blind Persons’ Rights Act, no one can deny accommodations, services or facilities offered to the public “for the reason that he or she is a blind person accompanied by a guide dog.” If convicted, the person may be fined up to $5,000.

The CNIB Foundation is launching a campaign to raise awareness about the rights and legal responsibilities of business owners across Canada and educate the public on the rights of guide dog teams, as well as best practices for when interacting with guide dog teams. For information on how to support guide dogs in your community, visit guidedogchampions.ca.

About CNIB Foundation
CNIB is a non-profit organization driven to change what it is to be blind today. We deliver innovative programs and powerful advocacy that empower people impacted by blindness to live their dreams while tearing down barriers to inclusion. Our work is powered by a network of volunteers, donors and partners from coast to coast to coast. To learn more or get involved, visit cnib.ca or cnibguidedogs.ca.

Joyce Family Foundation gives bursaries to 18 students with sight loss
January 20, 2021
CNIB thanks the Joyce Family Foundation for their incredible donation of 18 needs-based bursaries for Canadian undergraduate students with sight loss.
Craft&Crew and CNIB partner to provide digital accessibility to Canadians living with disabilities
January 18, 2021
Toronto, ON, January 19 - Ontario-based enterprise website production company Craft&Crew and CNIB, Canada's largest non-profit serving people with sight loss, announced their partnership today. This new partnership aims to help Ontarian organizations create a more accessible digital experience for everyone – including more than six million Canadians with disabilities
RBC makes transformational gift to support young people's futures
January 14, 2021
CNIB sends its deepest thanks to the RBC Foundation for their leadership contribution to support Come to Work programs for young people with sight loss.
Empowering youth with sight loss: Transformational gift from Scotiabank funds critical virtual programs
December 17, 2020
In May of this year, just when quarantine restrictions were at their highest, CNIB received a transformational gift from Scotiabank to ensure the futures of youth with sight loss remain as bright as ever.
Ninety years later, voting is still not accessible in Canada
December 02, 2020
The Canadian Charter of Rights and Freedoms gives Canadian citizens the right to vote. But for many Canadians living with sight loss, voting isn’t as simple as walking into a voting booth and checking a name on the ballot. It’s an inaccessible process that involves little to no secrecy, and numerous barriers.
END_OF_DOCUMENT_TOKEN_TO_BE_REPLACED